During the Dutch Open of 2019, Robin Tabeling and Selena Piek (placed third) became first in the mixed doubles.

In the semi-finals, Tabeling and Piek managed to surprise everyone against Marcus Ellis and Lauren Smith (England, winners of 2017 and 2018). The English couple was placed first. The Dutch duo managed to beat them with 21-17 and 21-14.

During the final, the third-placed Dutch duo (WRL-16) took on Chris and Gabrielle Adcock (England, second-placed, WRL-12). The Adcock’s beat the Danish couple Mathias Christiansen and Alexandra Bøje in the semi-final with 21-18 and 21-19.

With the winning of the final, Tabeling and Piek have achieved a historic victory. It is the first time in history that a Dutch couple wins the mixed doubles during the Dutch Open! The Dutch were hardly in trouble during the final and managed to beat Chris and Gabrielle Adcock 21-17 and 21-13. You can rewatch the game on YouTube.

On behalf of SERCOM Regeltechniek B.V.: congratulations on this great victory! 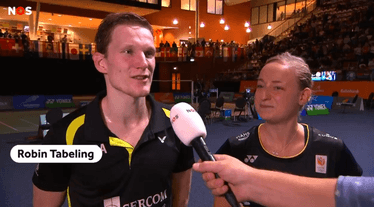 All results of the Tabeling / Peak couple can be found in the table below: